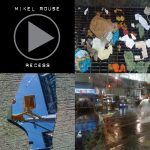 Recorded between October 2008 and November 2009, Recess is a lyrical reflection on the state of the world economy and the “reset” taking place before our eyes and ears. Inspired by Rouse’s work with Merce Cunningham and iPods (Rouse completed a score for Cunningham, International Cloud Atlas, that incorporated iPods set to shuffle so that each audience member had a unique version of the score) Rouse has collected field recordings and then orchestrated those sounds with multiple voices and instruments. The field recordings reflect every imaginable sound, from a couples’ quarrel in a NYC park to cicada’s in his native Missouri. Recordings of random conversations are vocally doubled and harmonized to enhance and heighten their meaning. While most people use mobile music players to “tune out” their environment, Recess takes the mobile device to a truly collaborative level. The experience of listening to Recess on an mp3 player or iPod while walking though a city environment is a new kind of mobile listening experience. WARNING: Extreme caution should be used while listening to this music in a public environment or while driving.

You can’t go out, you can’t be free. A million times I’ve tried to see. And when you’re sure you’ll never win. Come back some day and try again.

You need a minute, right? Thinkin’ about it all the way here, right? I could be suitable. Saving up time for a disco nap.

Picket my poverty I was on the right side of the law. Try to keep up with me I was something better than you saw. Dolls and dreamology try to keep the rubber from the road. See what you wanna see: savings for consumers’ lock ‘n load. Dreams were inside of me now I’m on a shortlist for the end. Everyone oughta be trying to roll over what they lend.

Taking a stand at the mini bar. Cutting class. Promises breaking the bank-filling the tank-left you alone-threw you a bone. If only there were two of you. One for me and one for you. All these people will be your enemy.

If that’s what you need to do then do it. I’m not gonna sit here and you know and and beg you and plead with you. Unbeliev- able! You’re talkin’. I’m telling you how I feel. So hear what I’m going through. You haven’t been talkin’ yet you’ve done nothing but like gone crazy went in circles. Crazy and simple you know what I’m talking about my job. What’s going on with your job? What’s goin’ on with your job they cut you like one hour a week? What’s goin’ on Oh My God

Mommy, mommy. Think back. I can see that you’re in charge. Oh I’m very much in charge. I’m very much in charge except in my own life. You can deal with this. I have no choice. I fire my assistant and I fire people that don’t even work for me. I’m very much out of control. I’m so out of control I pay my therapist. My own therapist won’t even take my calls. He won’t even help me anymore. Oh My God. Have a lovely day. They all have names. MySpace profiles. That they maintain themselves. You are very talented. You’re never goin’ back-keep goin’ back.

I don’t know what you want from me. You may be feeling better but your risk never goes away

I’m not sorry I don’t wonder anymore. Got no answers and bad credit like before. I don’t get it- House and Senate-it won’t fly. Take this mortgage take this money by and by. Over easy out of ideas out of steam. Continental, JP Morgan: the cream team.

I’m a lucky guy. Here’s the reason why: this plug nickel life.

Almost forty-almost fifty-fifty two. Take a morning or a lifetime just to do. All this packing-point of order-no return. Better living entry-level crash and burn. I got buried in arrangements like before. I took tickets out of ideas by the score. I’m not bitter I’m just tired of the fight. Drink to forget drink to regret drink all night.

I’m a lucky guy. I don’t even try. I will live and die never knowing why. Time to say goodbye to this plug nickel life.

I like the bread. The bread likes you. Look at that. Budweiser and what you say? I’m so happy to see you. Thank you. You’re so fun. What runs around in my head. In a suit, in a suit on the green board. That the only thing that they know is what they see on TV or the Internet. And it’s like advertising and you have some hack leg come along. Some hack leg.

So my computer crashes when I crash it. When I crash it and I’ll shake and bake it. Would you like a Medicare For All flyer? Being in control of your own destiny so to speak. I wanna fuckin’ build my own goddamn documentary and say it the way I wanna say it. Working history books that I got. What runs around in my head. In a suit, in a suit on the green board. The insurance companies are scrambling around trying to figure out all the scenarios. Misapprehension, misappropriation, even misuse. Nutcracker action people.

Because it was too expensive for them to provide it.

Then she got spooked. Yes, and mom got up to face them. She said something to them but they were, um, let’s say black and ghetto. So you could imagine you shouldn’t be yellin’ and screamin’. The reality that we’re alone, the reality is sinking in. What’s wrong with Peter? What’s wrong with Pam? What’s wrong with fairytales on demand? Everything. Tolerance is the word we just don’t need it. Years ago I could handle that.

I’m updating Apps on my phone. Is it itchin’? Liquid skin. Artificial skin. Eat my advertisement and don’t think twice. Love through music and love through vice. Bright as nothing and nothing nights. Shooting down the dead satellites.

I don’t know what it’s called but I’ve heard it that referred to as liquid skin and artificial skin and I don’t know… Early on we had a bad tick problem but then it got cool and I think that helped alleviate it and then it got so dry. That helped. So I don’t know. See early on dad would go out and you know be out in the yard mowing or weed eating or whatever and he’d come in and he’d say, “Is that a tick on me”? And I’d pull I don’t know how many of those little seed ticks off of him. Well, you know I trapped one. Took him off to the river. What’s Apps? An application. Oh. Then they came back and then one day they just disappeared. Don’t get comfortable. I quit putting out hummingbird feed for one thing. They have them in Kansas City too is all I’m saying. I don’t worry about it ‘cause I don’t get into it anyway. Dad’s got nine. Everything’s modern in Kansas City.

We got enough money to have a good time. What’s his is mine and what’s mine is mine. I said, “Well, when I see you, you can retrieve it”. Maybe it’s choice and maybe it’s fine. Are you homeless? Maybe it’s the choice of phrases in time. The Arkansas line they had thousands of utility poles down. Maybe it’s socialized baseball. What is that thing?

This is the birthplace of rock ‘n roll music. It is the only the most important room in all of rock ‘n roll history. Sun Studio. This is where all these guys got their start. I said I read the book and I can’t figure it out. Normally, used to, I could read the book and do anything like that. I’m trying to figure out it’s all symbols, you know. And I said I hadn’t figured it out. Well the book is… it’s the same book.

Michael‘s milk cow done died. Love is all you see loving family. Family dollar. He said we’ll have them set the clock and I said no he said well why I said well this is January and the time’s gonna change in March. So I just adjust it in my mind and that’s it.

Why do we drink? Everyone’s a coward until they get around to it they get inside of it. I don’t wanna be you do you wanna be you do you? Did you ever want to? Cattle in the morning on their way to the wrong system it’s either me or them.Simple when you crunch it. The numbers have their own logic their reason to exist. Everyone’s a number so baby watch them tumble down and make a terror town. Unlimited matter I’m showing off my Mick Jagger he’s still around you know. Maybe when we’re older the world will turn its cheek again forgetting where it’s been. Do the baked potato and everyone will never know what took so long to grow. And everyone’s a coward until they get around to it they see outside of it. Everybody’s waiting around waiting around. Why do we drink?

Is that money look at that. Remember that. There she goes. That’s a man right there. It’s all part of the act. Throw that money out the window. I diagnosed myself by watching machines work. I’m on a rendezvous with nothing left to lose. The weather’s never right it’s unpredictable. There is no rule we wanna believe that there’s a plan there is no plan and it never stops. They spread it all over the fucking highway.

You make me talk about failure. Making believe I am through. Catching a light from a trailer. You make believe that the problem is me and not you. You disappear in the morning. You may have already gone. Left planet earth without warning.Ending’s the very beginning when life gets too long.

I wake up every morning. Cheating death most of the time. I skipped the rope and the warning. Everyone’s different and everyone’s standing in line. All the time. Nevermind.

Everyone sticks to the center. Maybe it’s where they belong. Exiting where they would enter. Ending’s the very beginning when life gets too long. Everyday brings a new failure. Drifters and sidecars abound. Walking the walk about failure. Maybe success is reserved for the last one around. Lost and found. underground. Life gets lonely for you for me. As long as it’s gone adding on no more failure for you for me. On your own if it’s done life gets lonely for you.

Courage wake up brittle as a crutch. Nothing no free lunch. Capitals gain capitols touch. Andi I miss you so much. I settle now my finder’s fee remarkable for me. Forgetting God flakes around. Returns the subject line.

Courage just woke up brittle as a crutch nothing no free lunch. Call the cavalry every century one or two agree. Sitting on her hands courage when she lands look at all the fans. Naked and afraid courage just got laid something someone said.